Holy shit, a travel blogger who’s writing about Lufthansa in coach?!?? Crazy, right? From reading some blogs, it seems like Lufthansa only has a first class cabin.

I flew Lufthansa from Athens to New York JFK, with a layover in Munich (no First Class Terminal either???). And yes, I flew in coach, and it was a pretty good experience, especially when compared to the less-than-stellar Air Canada ride I had on the way over.

The short hop from Athens to Munich was perfectly enjoyable, largely because I slept through most of it. The flight wasn’t that full, which helped with comfort, but I was also surprised by how much room it felt like there was between rows. This is probably because of the slimline seats, which offer more legroom as the seats take up less space. While this was very much appreciated on a short flight, by the end, the lesser amount of padding was getting more noticeable, and I can’t imagine sitting on these seats for prolonged periods of time.

Given that the flight was a little over 2 hours, we were served a hot breakfast. As opposed to the pretty tasteless and unappetizing breakfast I had on Air Canada, this was pretty tasty.

On the flight from Munich to JFK, the service was generally superb. It’s sometimes just in the small things, like saying, “Certainly” or “It’d be my pleasure”, when responding to a drink request, but it makes the world of difference. I will have to say that it did seem like the flight attendants spent more time talking to the German-speaking passengers than to the other passengers, but I never felt that the service was deficient in any way because I didn’t speak German.

The food was also decent, although the snack they served prior to landing was downright puzzling. Of course, I inflict this upon myself by ordering vegetarian meals, but it was some sort of sandwich with dry bread and a greenish vegetarian pate. Not recommended, but the main meal was perfectly edible. 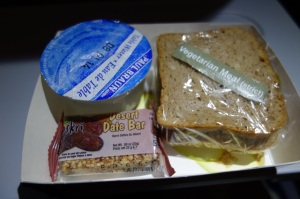 Overall, I’d definitely fly Lufthansa again in coach. Of course, I aspire to fly them in first class one day, but until I get there, I’ll be happy with the great service you can also get in coach.