I didn’t have boarding passes for my onward flights to Istanbul and Narita, so I had to go to the transit desk at Prague and get my boarding passes. This ate into my already short connection, so no lounges for me in Prague, and by the time I arrived at the gate after walking pretty quickly, I was one of the last to pass through security and get onto the plane.

Turkish Airlines is a little bit special in the European market since their regional business class product isn’t just a blocked middle seat, but it’s instead very similar to domestic first class in the US with large recliner seats. Some of the planes are showing their age, though, as the cabin on my flight looked like it had seen better days and the seat controls were pretty old.

They also had menus for this relatively short flight with a full hot meal service of appetizers, entree, cheese, and dessert.

Menu for the flight

I had heard a lot about how good the food on Turkish is, but it didn’t blow me away on this flight. The food was definitely better than what you’ll find on domestic first class flights in the US, but my entree of ravioli was not cooked very well (or rather, it was cooked too well) and the dessert was a little bit odd. But I can’t complain too much given that they do a full meal service on a flight that barely breaks 2 hours. 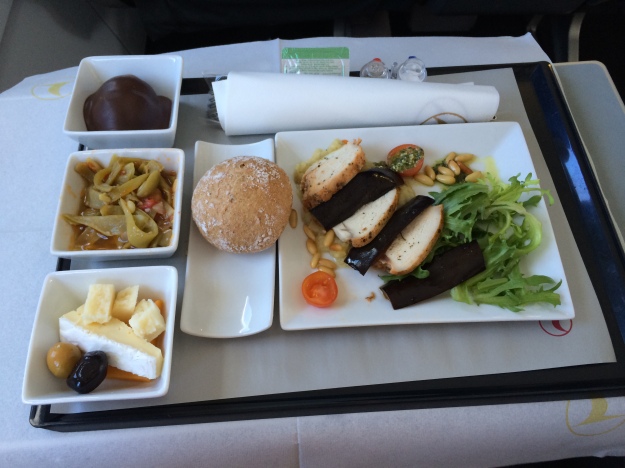 Overall, Turkish is a great choice of intra-Europe flights as they offer the nicest business class product that I know of. The seats are nicer than the normal blocked-middle-seat configuration you find on most airlines for intra-Europe business class, and the food was decent.